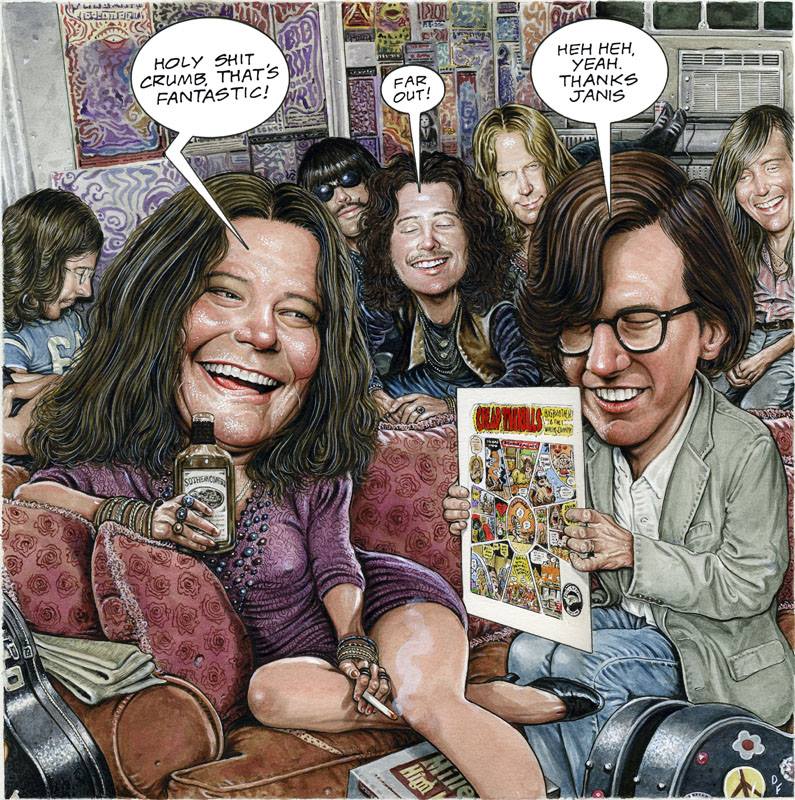 There’s a story that’s been going around for about 50 years that we wanted to call our album Sex Dope and Cheap Thrills. Well, it’s true.  Of course the ‘suits’,  at CBS records, headed by Clive Davis wouldn’t go for it; we kind of knew there was no chance of getting something that outrageous past those guys, though in many ways it would have been an accurate summation of our lives at the time. Sex and dope? For sure. A lot of books and articles about Janis and Big Brother have focused on that part, it’s easy and obvious. But the Cheap Thrills part; what does that really mean if you’ve already covered sex and dope? I like to think it was a metaphor for the music itself, a way to describe our love of the kind of rock and roll we were creating and especially the thrills we all felt when we were playing live for our audience, whether it was fifty or fifty thousand. They would be buying and listening to this record and hopefully some of those thrills of being at, seeing and hearing a live, Big Brother and the Holding Co with Janis show could come through this vinyl disc inside a colorful cardboard sleeve.

Another truth is that the making of Cheap Thrills took some real work. Figuring out how to recreate our live energy and spirit as a band in the recording studio often meant struggling with the demand that recording makes in having to perform more precisely. There were tensions between us and with John Simon, whom we respected but was from another world. There was frustration and plenty of failures as well as joy, musical breakthoughs, growth as musicians and as a band. Fortunately, with Big Brother there was also love between us and there was always a lot of laughs.

When all the recording, mixing and sequencing was almost finished, CBS, knowing that this album would ship ‘Gold,’ was anxious to get this much-anticipated product out and into the stores. But there was still one part of the puzzle that we hadn’t figured out; we still didn’t have a cover. What could be the perfect visual… the art that would evoke what was inside… the energy, the intensity, the crazy spirit of what we were… our persona as a band?

Janis thought it would be great if we all got naked and in bed together for a photo shoot. So we actually did that and it was awkward. The set they had put together was flowery and phony and not funky; the vibe was uncomfortable and uptight. The whole thing was misguided and the picture was a dud. We saw that that wasn’t going to work

Then Bob Cato, CBS’s art director, thought we should do a photo session with Richard Avedon, perhaps the most famous, fashion photographer in the world. Avedon did his ‘Avedon thing’ on us; the fan blowing our hair, the strobe lights flashing, white background, random rearrangement of our faces. It was another huge and costly miss. The photos were good but more about Avedon than us…

We had a huge loft/warehouse in SF where we rehearsed and I lived. I remember us all sitting around and talking ideas for the cover and I said ‘How about asking R.Crumb?’  Janis, James and I were all big fans of his work, we loved his cartoons which were appearing in the SF underground newspapers and Zap Comics. But outside of SF not that many people knew of his genius. Everyone thought it was a great idea.

I had a friend at that time, a guy who had just come out of medical school who was going out with a girlfriend of my girlfriend at the time. I knew he’d come from Cleveland with Crumb just a few years earlier and they were still close friends.  I said “why don’t we try to call him, I’ll get his phone number” and Janis jumped right in; “Can I be the one to call him?” So I got his number from my friend, Shelly Rosen and I gave it to Janis and Janis called him and he said ‘yes.’ Amazing! The next weekend Crumb came to our show at The Carousel Ballroom, sat on the floor in our backstage dressing room and observed. He really wasn’t into our music but it didn’t matter. It was maybe one or two days later Crumb called Janis to come and pick up what he’d done.

When Janis brought it to us at the warehouse, there was a different front cover.  The original front cover Crumb did had these cartoon stick figures with instruments on a stage with photos of our faces pasted in; it wasn’t great..but the back was – to all of us without question – totally brilliant.  It was obvious to all of us that what Crumb had intended as the back had to become the front cover and this decision turned out to be the most noticeable and important game changers in the story because the back, with all it’s comic – book panels for each of the songs and for each person in the band is what would forever be known as the cover of Cheap Thrills. It has become iconic, one of the greatest album covers of all time and its greatness is that it is an inseparable expression of the music inside. We now had the whole package.

But then there was a problem.  You’d think it might be the ‘Mammy’ character in the ‘Summertime’ panel but no, it wasn’t.

When John Simon sequenced all of the tracks we wanted to include on the album he presented it to the band and to CBS. The second side began not with Turtle Blues but with Harry, a crazy, abstract, free-jazz-freak-out I had written that was less than a minute long. In our live performances we sometimes began OR ended our set with it. When Crumb agreed to do the art, Janis gave Crumb the titles of all the tracks based on John’s original sequence; nobody imagined there would be any more changes to the music. She must have told Crumb that Harry was ‘Harry Kirshner’ ( i.e.‘Hari Krishna’) an inside-the-band joke. Hence Crumb painted what he thought was going to be the back cover with all the song titles and people in the band with that information,

So now we have this beautiful, brilliant and finished album cover and one of the panels on the back (now the front) was a picture of a guy with a turban holding up his finger. Behind him is a cityscape of minerets and temples. This cartoon panel is intended to represent Harry the first song on side two of the album. But – and here comes the bomb – after all this work is done, Clive Davis who was the President of CBS records doesn’t get it, doesn’t get the whole idea of starting side two this way, he doesn’t get either the music or the joke. He insists that this track be removed. I’m sure he wanted the second side to open with Janis singing and of course it does.

Over the years I’ve wished we’d told him ‘no’, stood our ground, that this was our record and it was true to what we were and what we did in our live performances but to be honest there was no resistance; we caved because we too wanted to get this out asap and we wanted everything with our record company to go smoothly.

However, this created another problem, what about the cover? What are they going to do with that panel, the guy with the turban, the minarets?  Ah ha! Columbia records art department takes Crumb’s art, takes out his lettering for Harry and puts his name in there – “ART, R. CRUMB” –  in lettering resembling his handwriting. It makes one wonder: does R.Crumb like to sign his name next to a guy in a turban? Does R.Crumb wear a turban, live in Baghdad? Pretty ridiculous when you think about it.

Robert was really offended by the whole thing; he was not expecting to be treated to the rude and impersonal ways of the commercial art world when he said he’d do this gig. No one had ever changed his work like that, but they just went ahead and altered his art – and it truly was art -without even asking. Yet when Cheap Thrills came out no one seemed to notice how strange that was. In the 50 (count em) years since, most people who’ve loved the record (Rolling Stone once considered it #50 in their ‘Greatest Albums of All Time’ list) no one has given it a thought. At times I’ve posed the question to some journalist or a fan:

Did you ever wonder why it says ‘Art by R. Crumb’ with this picture of a guy with a turban and a Middle-Eastern cityin the background?”  “Yeah” they say, “ That’s weird but I never really noticed”.

There is another part to this story. The postscript if you will. Robert Crumb never took the original art back; He didn’t want it back and it was left in the art offices at CBS; I don’t think he ever was paid or wanted the $600 from CBS for the job. A year or so after Janis died we called Columbia to see if we, the four of us who were Big Brother & the Holding Co could get the piece back. Bob Cato who was still the director of their Art Department said they couldn’t find it. They looked, called us back, ‘it seems to have disappeared, maybe someone had stolen it. Who knows? What could we do? We moved on and forgot about it. About 12 years go by and it shows up in an auction at Sotheby’s in New York. It sells for about 25k but Sotheby’s doesn’t have to tell you who consigned it or who bought it and they don’t want to. We try to sue them and fail (that’s another long story).

Then another ten years and it’s in another Sotheby’s auction. The second time the bid that snags it is about $250k  and who bought it is in the newspapers. The original artwork is now owned by the CEO of Nike; you can google his name. He has a large and impressive collection of pop and comic art. One of the pieces he proudly owns and displays in his office is Cheap Thrills, an object that I know is stolen art. I would guess that this CEO probably has no knowledge of this little bit of history and might not care. There are only a few people who know the truth; the two  original members of Big Brother and the Holding Company, Peter Albin and I, the guy who swiped it from the art dept at CBS in the early 70s, some of the sleezeballs at Sotheby’s and of course Robert Crumb who has lived in Southern France for most of the years since Cheap Thrills..oh yeah, and you.

twitterfacebookinstagramemail
© BIG BROTHER AND THE HOLDING COMPANY | 2018 | All Rights Reserved.
Back To Top